Of Parakeets and Rescue Bears 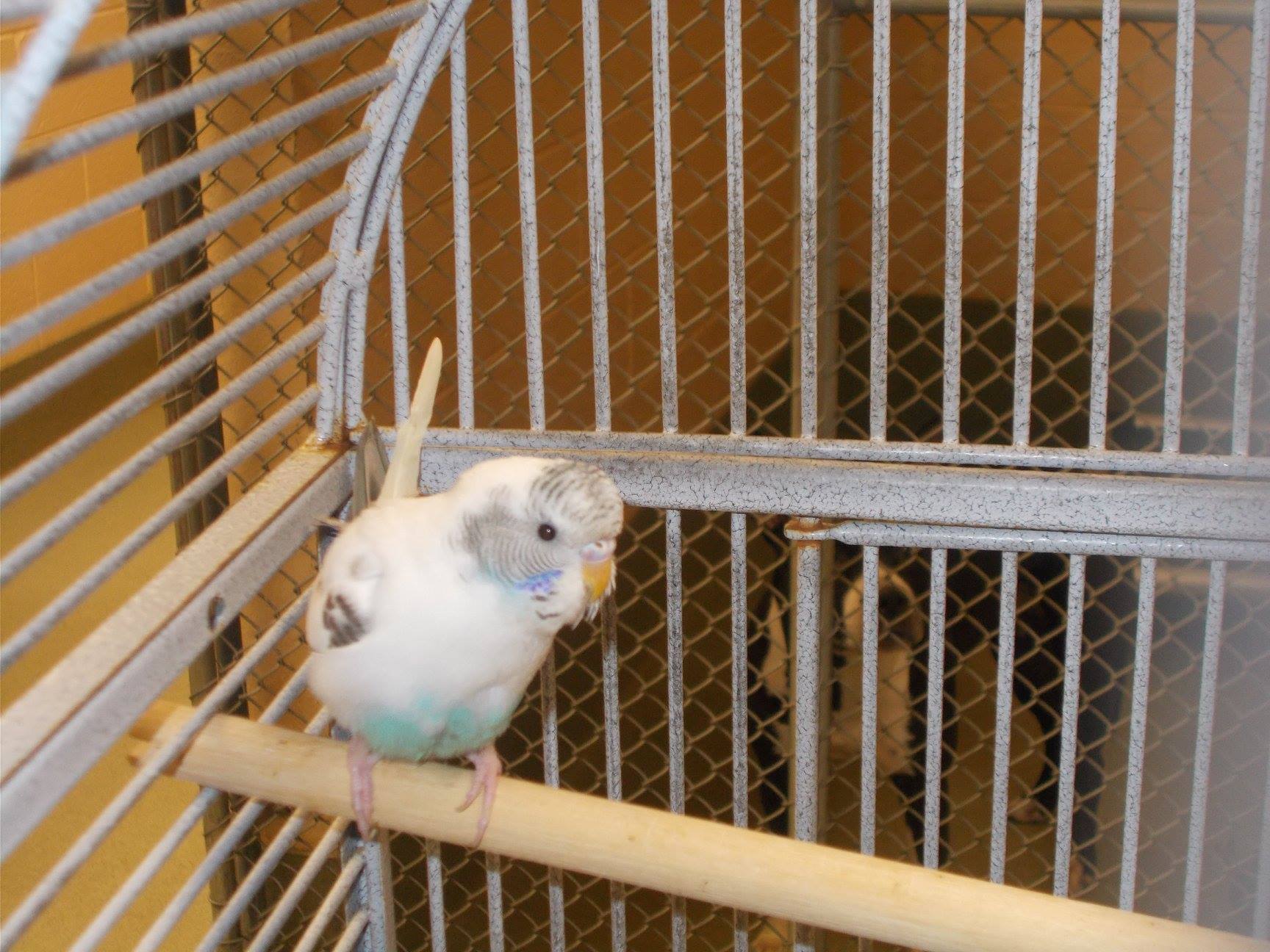 William Simpson and I were out and about yesterday doing a variety of errands. Our last stop was to visit our storage facility. I have a bunch of stuff from Mom’s house in there, plus an F350 bed-load of items belonging to Melissa. Our mission was to retrieve Melissa’s stuff and bring it home so she could get it the next time she’s in the area.

We went into the office to talk with the nice couple who manages the facility. Note: this storage site is cleaner than any home I’ve ever kept! As we walked into the lobby, we noticed a pretty little white and blue parakeet sitting on the bench outside, enjoying the afternoon sun. I thought maybe it belonged to the managers and that they were letting him charge his solar batteries for a bit.

The man said “It’s been trying to fly inside for a while.” I replied, “Well, it’s a parakeet so it shouldn’t be flying around on its own here!” He didn’t realize it wasn’t just some random wild bird.

I had visions of it being eaten by a fox or snatched up by a hawk. Poor little guy – he found out the hard way that fleeing the coop might not be the best situation. All of a sudden, he was out on his own in the big scary world. I told Hunky Hubby that we had to catch him. HH just rolled his eyes. 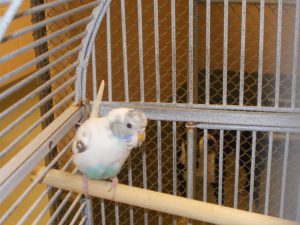 OB proved fairly elusive. Oh yes, I gave him a name: Oiseau Bleu, or OB for short. I thought about Woz (Oiseau), but OB seemed to fit. He was either peeved that a giant human was trying to catch him or he was terrified and decided that flight was better than fight. OB flew erratically and in short spurts, so I guess he had his wings clipped at some point, but that his owners weren’t diligent about keeping up with that practice.

OB fluttered around the exterior of the facility, with me in lukewarm pursuit. I eventually managed to capture the wee warbler by tossing my fleece vest over him. HH got a box from the storage wallahs and OB was then safely ensconced in it.

Rather than go home to finish our chores, we had to make a detour to the Animal Shelter. HH was not entirely amused, but when I asked if we could keep OB, he saw the benefit of prolonging our day just a bit more. I told him he was a big meanie for not letting me have a bird. He rolled his eyes again and told me (and my feathered friend) to get in the truck. I stuck my tongue out at HH when his back was turned. That’ll teach him!

On the way to the shelter, we encountered some traffic. I looked over at the SUV in the left lane and remarked to HH that they had a bear in their vehicle. Really – it was HUGE. Okay, so it wasn’t actually a bear, just a Newfie crossed with a bear. Said beastie stuck his head out one window and his tail was poking out of the window across the backseat. He should have been named “Hooch,” for the amount of drool that was being merrily flung about the exterior of the SUV. His head was enormous, and I feared that it may never get back inside the SUV once he stuck it out to woof at us. I could tell his other end was wagging, since the vehicle was rocking from side to side.

Traffic was at a standstill now, due to an accident (without injuries, thankfully) in the left lane. Bill rolled down his window to greet the two young men driving the woolly mammoth to wherever fuzzy mastodons are wont to go.

Bird Hating Hunky Hubby (BHHH): [chuckling jovially, because apparently he doesn’t hate 400lb dogs as much as he hates 2oz birds] “Hi! Wonderful day for a drive. Did you know you have a bear in your backseat?!”

Sense of Humor Impaired Squires (SoHIS): “He’s not a bear. He’s a rescue.” [This is where I violently rolled my eyes – I mean, really, a bear could also technically be a rescue].

BHHH: “Er, yes, I meant, oh never mind. He’s a stunningly gigantic dog!” [At this point, the mammoth looked over at us and grinned, so we both made “who’s a good boy” noises].

SoHIS: “He likes to ride in the car!” [Okay, he probably has to live in there. As far as I knew, he got in as a puppy, grew to his current size, then was stuck forever].

BHHH: “That’s quite the slobber factory; is his name Hooch?”

Well, why wouldn’t it be? Charles’ keepers didn’t seem to be as happy as their furry charge, and I imagine that Charles probably had a better sense of whimsy. Naturally, I asked (rhetorically) who names their dog Charles anyway? Not that it’s a bad name, but that canine was no Charles. Maybe Andre (the Giant) Fluffball. Clifford? Cerberus? Marmaduke? Not Charles.

Once we got around the accident, we continued our way. The Charles-filled SUV zipped down the road, its rear end nearly dragging the pavement. We could see Charles’ immense cranium sticking out the back right window, with his tail wagging furiously out the left window. Bits of slobber wafted through the afternoon air. Thank goodness for windshield wiper fluid.

By this time, OB had settled down in the cardboard box and was serenading us. He had a lovely voice. I told HH that I had named him. He panicked. I cheerfully shared my Plan B with HH – one should always have contingency plans – in the event that the shelter didn’t accept my feathered crooner.

Mari the Avian Lover (MAL): “Of course I have a Plan B. What if the shelter doesn’t take birds? We can’t just let him out to fend for himself;”

BHHH: “What the hell, you lunatic. I told you, no birds.”

MAL: “Okay, no permanent birds. But, we’d have to keep him temporarily. I’ll be OB’s foster mom.” [I said this brightly, as if my upbeat tone of voice would calm the bird hater in the seat next to me].

MAL: “It’ll be different this time. Really. [I think I saw a tear in the corner of Bill’s eye]. Bear with me, Charles, as I explain my plan!” [Do you like what I did there? Bear…Charles..].

Here’s my brilliant plan. We’ll zippity-doo-dah right on up to PetSmart. It’s on the way home from the shelter. I’ll rush in with the bird-in-a-box, and purchase the smallest cage needed to house OB safely. I’ll buy only the basic bird necessities (water dish, parakeet chow, a toy or two, a perch, a mirror), and whatever else will help a handsome songbird overcome his recent trauma of being alone in nature. Then, we’ll take him home, get him settled in his new avihabitat, and we can start sharing him on social media. If his careless owners aren’t overcome by grief at their negligence and looking for him, we’ll find him a new forfeather home. Yes, forfeather. When one rescues a mammal, one becomes the furever home. OB doesn’t have fur; he has feathers…

We arrived at the Prince William County Shelter moments before they closed for the day. Bill looked relieved; I admit to being slightly crestfallen. They did, in fact, take in wayward warblers and an employee quickly relieved me of the cardboard box, from which was still emanating the song of OB’s people. But not until after I’d announced arrival by offering to trade what was in Box #1 (thank you, Carol Merrill) for all the dogs in the shelter. It was at this point that BHHH surreptitiously googled “Divorce Attorneys” on his smart phone.

After some paperwork stating that, as far as we knew, our recent charge hadn’t bitten anyone in the last ten days, BHHH and I were back in the truck and heading home. I reassured my long-suffering husband that I honestly don’t want a forever bird. I did, however, think that having a short term feathered house-guest might be nice. Once again, he asserted that I was misinformed!

So, we did our good deed for the day, and we returned home without a bird and bird accouterments. I opined that Lacey might have been intrigued with a new non-human roommate. That comment elicited another heavy eye roll. I bet Charles would have joyfully endorsed my plan. After all, as a recent rescue, I bet he remembered the importance of having a good foster home. Or, he would have eaten OB. We’ll never know

PS: There was, after all, a Plan C. I am in charge of planning and worrying. I had determined that my second attempt at being a foster pet parent would not end in failure. I’d show BHHH I know what “foster” means. I would shame Melissa into taking OB home to Georgia with her after her brother’s wedding in a couple of weeks (Sorry Aaron). OB would certainly prefer Coastal Georgia to Northern Virginia. And, OB would still be in the family. I wonder if Charles could join him?